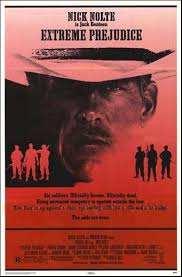 In 1987, I was a big Walter Hill fan. At that time, this was based on three movies of his that I'd absolutely loved -- THE WARRIORS, 48 HRS, and STREETS OF FIRE -- and two more I'd had a lot of respect for -- THE LONG RIDERS and SOUTHERN COMFORT.

But somehow, the movie EXTREME PREJUDICE came out completely under my radar. I hadn't heard a thing about it when a buddy of mine and I, driving around on a Saturday when neither of us had a damn thing to do, saw a pretty cool movie poster... for this film outside a 4 screen multiplex in North Syracuse and decided, knowing absolutely nothing about the movie but the title, and that it had Nick Nolte in it, that, what the hell, we might as well kill an afternoon watching it.

So we're sitting in the theater and the lights go down and the grainy leader stock starts to flicker up on the screen and then that cheesy Carolco graphic goes up, and I get a little tingle. I don't know why, the graphic means nothing to me, but if linear time really is an illusion and we actually do know everything, we just can't remember it all at once, I can only assume that at that moment, my subconscious knew that sometime in the future, I'd be watching a lot of awesome films following that logo -- movies like ANGEL HEART and THEY LIVE; JOHNNY HANDSOME and THE TERMINATOR; MOUNTAINS OF THE MOON and BASIC INSTINCT.

And then the names Mario Kassar and Andrew Vajna flashed up on the screen and now I'm definitely getting a real good feeling; I know those names but at that moment, I can't quite place them, and then, there it is:

And I looked over at my buddy, sitting a seat away from me (he was always a little homophobic that way) and I said "Oh, THIS is gonna be GOOD."

And I was right. In fact, of the Carolco cinematic firmament, I would say that EXTREME PREJUDICE is its brightest star. This movie has no pretensions whatsoever, no redeeming social value or meaningful commentary on anything, it's simply ...a balls to the wall all out action flick loaded to the cannon-mounts with the finest gunfights ever recorded on celluloid. Nick Nolte is the keystone in the casting arch but he's got some heavy duty company in Rip Torn, Powers Boothe, Michael Ironsides, Clancy Brown, William Forsythe, and Tommy "Tiny" Lister ("Remember him from Monday Night Football?").

As with another favorite film of mine, CONGO, this is an obscure little B movie gem, well written, beautifully directed with a fantastic cast (even Maria Conchita Alonso as the dumbass chick who has to be rescued from the bad guy can't manage to fuck it up, that's how good it is) that has never gotten the credit or the attention it deserves.
Posted by Doc Nebula at October 01, 2010 No comments: Links to this post