* * * Couple weeks ago Nate came over and put a wrapped package roughly the size of a Cadillac Eldorado under our tree. "It's for the whole family," he smirked, and even under the most extreme torture, he would not tell me what it was. (What made this especially irksome was that SuperWife knew what it was; apparently he had consulted with her on technical details when purchasing... whatever it was.)

So, after waiting weeks, and then through all the other presents this morning at Nate's insistence, we finally opened it. Within? 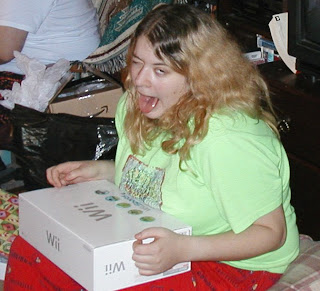 It's a fucking Wii, dude.

* * * Before that, I got... well, clothes for work, and some cool slippers with memory foam soles, and then, see, there's this list I keep of books I want that are out of print. Stuff like Andrew Sugar's THE ENFORCER series, which I read when I was a teenager and have never been able to find since. Stuff like COBRA TRAP, the most recent and last Modesty Blaise book. Stuff like STAR BARBARIAN by Dave Van Arnam, which I read the sequel (LORD OF BLOOD) to decades ago, and still own that copy of, and it's one of my favorite books, and I have always wanted to read its precursor, but never really thought I'd get to.

Apparently S.M. Stirling has a couple of new books out, which, once some bills get paid, I may look into obtaining, as well. Not that my in stack isn't already high enough, given that we'd stopped at Book and Music Exchange to get Nate some books for Christmas and I picked up about five paperbacks there for myself, too. But a true bibliophile's Want To Read in stack can never be too high, short of mortal diagnoses.

I also got SHREK THE THIRD, THE HOST, and THE PRESTIGE on DVD.

And, um... there was this cool little box from Mike Norton, and it had HeroClix in it, which, despite the fact that I'm not collecting HeroClix anymore, still utterly delights me. All four of the Silver Age X-Men from the latest expansion (the lack of a Silver Age Angel in the set annoys me no end, but never mind). A Leader (not that stanky Peter David Leader from more recent times, but a real honest to jebus Silver Age Leader with some of his little android minions on his base). A Super Adaptoid. An Absorbing Man. A Zzzzaax. A Gorgon. A first appearance Hulk. A Devil Dinosaur and Moonboy duo fig!!! Aaaaaaaand... a Mastermind, which is especially (but far from uncharacteristically) generous of Mike, as it's a Super Rare piece. I love them all, even if I will never get to play any of them.

Also, I got this cool Christmas themed t-shirt from my mom and stepdad which has little colored bulbs in it that actually light up.

The Colletts gave me the first season of ALIAS on DVD, which is a very nice thought on their part, although to be honest, I've never had any real interest in the show.

* * * Not too many Christmas pics this year. I should probably list what everybody else got, but honestly, my brain is aswirl. Super Adorable Kid got a lot of toys, including a new Bratz doll complete with snow bunny ensemble and remote control snowmobile that goes well with her Bratz ski lodge. Super Dependable Teen found her most expensive gift in her stocking; a Nintendo DS. She also got a booster box of Magic cards (SAVIORS OF KAMIGAWA, one of the cheaper boosters boxes available on Ebay) and a really cool STAR WARS pop up book. Super Drama Teen got mostly clothes, as she's a grown up now and that's what grownups get, but she liked the clothes we got her, and she also got an inexpensive digital camera and some badly needed CD/DVD storage shelves.

SuperWife mostly got useful everyday items she'd mentioned wanting or needing over the past year -- a rolling pin, a new purse, a food processor. On the lighter side, I also threw in to her haul the new Scene It game, the first season of HEROES on DVD and a nice snow globe -- every year I try to get her some kind of Christmas decoration; last year it was also a snow globe. I tossed several boosters of Magic cards into her stocking along with a lot of candy, a Simon & Garfunkel CD, and some goofy little stuff like a miniature Etch-a-Sketch. I also got her a leather jacket, but she didn't like the style and is going to return it... just as well, as it's really more money than I probably should have spent on her, with our car needing repairs.

SuperWife got a gift card for Panera Bread, perhaps her most favorite fast food ever, from Mike Norton. In addition, she loves the cool little green velvet-finish box Mike put my clix in, and immediately confiscated it after I took the figures out of it.

The Colletts sent gifts for everyone else here as well, and showed fabulous judgment in what they got for everyone who wasn't me. Super Adorable Kid loves her new teddy bear, the two older kids loved their fleece throws, and Nate was over the roof about the two t-shirts the Colletts sent him.

However, on that subject, the best t-shirt given this Christmas season was a black shirt SuperWife and I made for Nate using iron on transfers. Now, in order to understand just why this t-shirt was The Best, you have to understand that Nate is an avid WORLD OF WARCRAFT player.

Then, you have to look at the actual graphic I created for the t-shirt using graphics from the SOUTH PARK episode about WORLD OF WARCRAFT, in which a mysterious super-player who 'had no life' showed up and started easily slaughtering every other character in the game. We only saw that player a few times for very short periods of time: 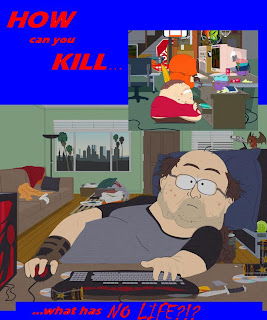 Finally, you have to realize that, well, this is Nate: 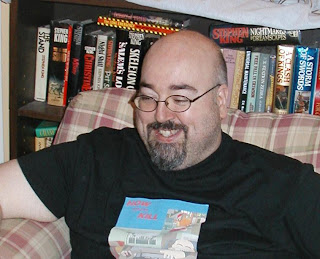