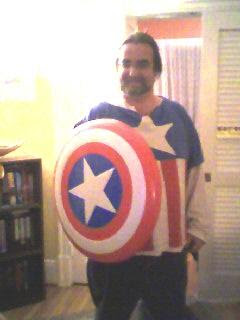 ...and various other assorted sundries.
The pic is from my birthday, the big 48, nearly a month ago. Time flies during the holidays around here. The shield was a gift from my eldest daughter, Super Drama Teen, who, being twenty years old now, should probably just be called Super Drama Daughter or some such.
I got other cool stuff -- a nifty Silver Age JLA and Flash t-shirts from Nate, the two FF movies from Super Adorable Kid, some magic cards and an awesome Silver Surfer glass from Super Dependable Teen, a copy of a very useful and avidly sought after, long out of print, roleplaying resource book from SuperWife, and... hrm... probably a few other things I can't remember. But the shield, which Super Drama Daughter found on vacation in Gatlinsburg and hid out for me for months, was the highlight.
I have such great kids.

Last summer, I started up another blogspot page, all about this pulp hero RPG scenario I came up with set in the fabulous 1930s. Check it out, if you've a mind to.
In other random bits of geek blather, I've been watching the first season of THE VENTURE BROTHERS on DVD over the last couple of mornings before I leave for work. Remember THE TICK cartoon? Remember how unbelievably hilariously hysterically bust-a-gut nearly laugh yourself into an aneurysm it was, pretty much constantly, in every single episode?
Well, if you're looking for another pulp hero parody/pastiche cartoon series that is consistently about half as funny as THE TICK, and that occasionally gets up to being nearly 2/3s as funny as THE TICK, then this is your show.
That may seem like damning with faint praise, but I can't think of anything else on that's even half as funny as THE TICK used to be, so, whatever. THE VENTURE BROTHERS is cool, mind you, and I'm enjoying it. It's just, kind of, THE TICK-lite.
Continuing the random, I think it's time. Time for Joss Whedon to just admit it. However much he hates it, he needs to stop running away from it, stop living in denial, and just embrace it: the only thing he can do right is BUFFY. (DR. HORRIBLE was cool, but it's not going to work as an open ended series.) He needs to stop wasting years and years and years that we and Eliza Dushku and Anthony Stewart Head are never going to get back, buckle down, gear up, and do a goddam FAITH series.
And if he'd honestly rather die than re immerse himself in the BUFFY verse, well, I'll write the fucker. I'm easily as fat as Whedon. And I have the same kind of whiny voice he does. Plus, I have a cool Captain America shield. What more could anyone ask for?
Posted by Doc Nebula at December 17, 2009 2 comments: