I'm not one of those guys who goes on and on about how much better the world was when I was a kid, or a teenager, or a young adult in my 20s. For the good and simple reason that it wasn't. We didn't have videotapes or DVDs, gays still stayed in the closet or got treated like shit by mainstream society, there were no cell phones, and, of course, there was no Internet. Hard though it may be for anyone born after 1990 to imagine THAT.

But in some odd ways, the world of my youth was a better place, too, or, at least, more tolerant. As examples, I give you a couple of pop culture artifacts that absolutely could not be duplicated in the modern marketplace: 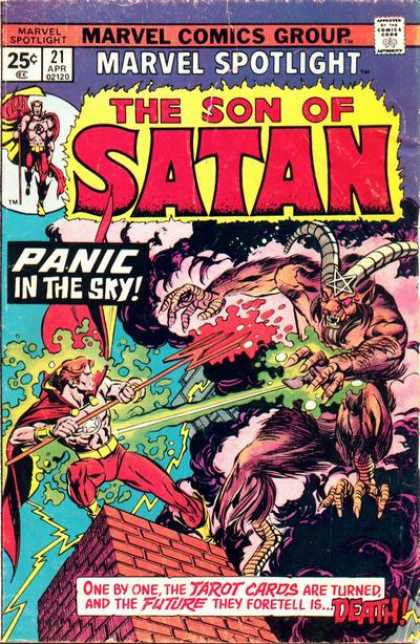 Seriously. No shit. In the early to mid 70s, Marvel Comics published a title called SON OF SATAN. There was nothing particularly distinguished about it; some not particularly good Steve Gerber scripts and some reasonably humdrum Jim Mooney art, and some stories full of pretty typical 70s hippie/horror cliches. But it was right there, on the spinner racks at the five and dime, right next to SPIDER-MAN and BATMAN and all that Harvey and Archie shit.

Sometimes I just imagine the reaction if some comic shop owner tried to put out a couple of copies of something called SON OF SATAN on the same shelf as BETTY & VERONICA or CASPER THE FRIENDLY GHOST. I stop after a couple of seconds, though, because otherwise, my head would just explode.

ANIMAL HOUSE was outrageous for the mid 70s; that was the point, that's why it was so funny. But in the mid 70s, at least, you could joke about that kind of stuff. Nowadays, you suggest making a movie full of racist, homophobic, sexist jokes that ends with the destruction of the homecoming parade, the movie's nominal hero banging a 13 year old in an outdoor stadium, and John Belushi being elected Senator, and everybody else at the meeting will have simultaneous aneurysms.

Now, I do understand that many if not most people alive at this time would regard all this as progress. We can't expose our children to Satanism, our young adults to racist, sexist, homophobic vulgarity and violence and especially, we can't make any of it look comical! This stuff is deadly serious! And never, never to be discussed!

I don't miss much about my youth, other than a flat stomach, a cast iron digestive tract, and a general absence of aches and pains. But sometimes, I wish the world was still as open minded as it used to be about controversial subjects.
Posted by Doc Nebula at September 04, 2010 No comments:

Some people found THE EMPIRE STRIKES BACK to be a miraculous event, for probably a million different reasons. I liked EMPIRE, I think it's the best of all the STAR WARS movies, but, then, there are only two STAR WARS movies, and a short feature about 20 minutes long where the cast from the first two films rescues one of their member from a big gelatinous mass on a desert planet. So that's not as major a distinction as it could be.

Many people were struck hard by a minor character in EMPIRE, a little throwaway part called Boba Fett. There was nothing at all to Fett; he had like six words of dialogue and that dialogue was undistinguished, to say the least. Those who eventually acquired lifelong obsessions with this character managed to grow their fanatical attachments from the tiniest and most minute of seeds... an interesting helmet design, or the fact that Fett's spaceship looked like a steam iron.

It's important, then, to keep in mind the facts of the case, and the facts of the case are this: Fett was an idiot, and an incompetent. His greatest accomplishment was handed to him in a block of carbonite. His gruesome death occurred when he fell off a sail barge into a monster's maw and was consumed, after being struck in his dimwitted armored noggin by a random swipe from a broomstick wielded by a blind man.

Fettishists like to tell each other stories about how Fett was the greatest bounty hunter in the galaxy and they dwell on all the amazing and wonderful things that he did (which they just made up) before the STAR WARS equivalent of Helen Keller smacked him with a hoe handle and knocked him into a big toothy stomach where he died, and some of them even make up stories where Fett somehow got out of the big toothy stomach alive and continued his career.

But these are like the stories where Batman and Superman have sex together, often times dressed in cartoon animal costumes while Kirk and Spock join them for a big gay furry fourway.

They are not real stories. They are just sad, silly, idle daydreams, and while sometimes some of these stories are well written, nonetheless, there is nothing to them.

Just thought we should have that clear between us.
Posted by Doc Nebula at September 04, 2010 No comments: