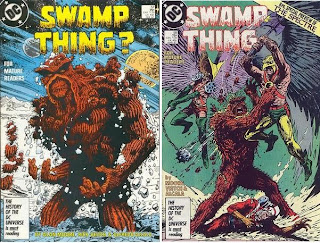 Had one of those weird moments just a few minutes ago. I was thinking of the two issues of Moore's SWAMP THING where Swamp Thing ends up on Rann and meets Adam Strange (57 & 58). It occurred to me I hadn't reread them in a while and I'd like to, so, certain I had copies of them, I went to my bookshelves and thumbed along the shelf, past Superboy, Superboy and the Legion, Supergirl, Superman... to... Thor?

It was strange. Now, I knew I'd lost my original copies (the ones I'd bought off the stands back when they first came out) in the Comics Collection Catastrophe back in the late 90s. But in 2004-05, when I was living in Zephyrhills and had far more money than I could spend (due to cheap rents and a complete and utter lack of social opportunities), I put about a thousand bucks, maybe more, into rebuilding a lot of my lost collection... and I was absolutely sure I'd ordered new copies of several of my favorite Alan Moore SWAMP THING issues, including, of course, that 2 parter, which was the only readable part of a seemingly endless story arc where SWAMP THING went interplanetary and wandered from one solar system to another after being forcibly expelled from Earth's life force by a nefarious Lex Luthor death beam.

I mean, I was CERTAIN I'd done that. I had no specific memory, mind you, but it just seemed like I'd read that 2 part story relatively recently... much more recently than would be accounted for by my forcible separation from my previous collection in 1997.

But... no SWAMP THING on the shelves, none at all. And my middle daughter, who has explored my comics collection extensively since 2005, reports never having seen an issue of SWAMP THING on those shelves at all. (She likes Moore, so if I had any, she'd have spotted them.)

So I was absolutely certain I had a copy of those two issues, but, as it turns out, I do not. Which makes me sad, as I really enjoy them.

One wonders just how much one's mind would play tricks on one if one could live for centuries, instead of simply for decades.
Posted by Doc Nebula at July 27, 2010 No comments:

Who watches the, you know...

For those who may still care about this long dead horse, here's the book Moore ripped off large chunks of WATCHMEN's plot from: 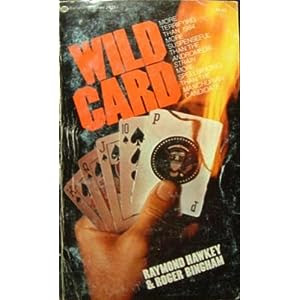 Details vary, naturally, as Hawkey and Bingham were writing a science fiction political thriller, not a superhero comic. However, sequences such as the one detailing the murder of all the people working on the WILD CARD project (they're all on a plane, supposedly being sent to Bermuda for a vacation; the plane gets shot down by U.S. military aircraft) and, specifically, the ending (in which it is strongly hinted that word of the WILD CARD project will be released to the public, but not specifically stated) make it pretty clear that Moore had read this book prior to coming up with his WATCHMEN plot, and liked it enough to steal blatantly from it.

But you don't have to take my word for it. The book is out of print, but you can order copies pretty cheaply through the link above. Check it out for yourself.
Posted by Doc Nebula at July 26, 2010 No comments: