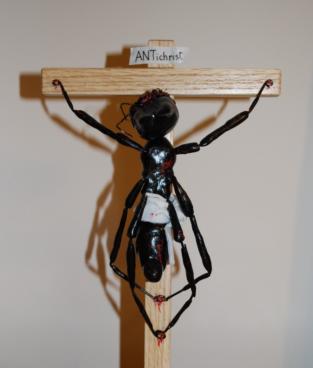 One of the bigger scams, and one I most resented as a kid, and still feel some pretty significant echoes of that resentment nowadays when I think about it, is the public relations scam revolving around the phrases "Good News!" and "A special gift just for you!".

The fuckers never front load with the whole phrase, of course. It was always just the above - "There's Good News!" or "There's a special gift just for you!" This was to set the hook. This was to make your mouth water and your eyes light up, to get you interested.

And then they'd roll the whole wet and stinking turd out. "Good News -- Jesus died for your sins!"

"There's a special gift just for you -- salvation, redemption, and forgiveness! In Jesus' name, amen!"
As a 12 year old, I always wanted to say (but never did; my mom would have knocked me the fuck across the room) -- "Jesus' death isn't exactly 'new', good or not -- it happened two thousand years ago".
Similarly, I also never said "If there's a special gift just for me, I'd rather have a cassette tape recorder, please". I mean, seriously. Salvation, redemption and forgiveness? That shit was worse than the flannel shirts gramma always gave me for Christmas.
And it always got worse, too. Assuming for some insane reason you were living a life so pathetic and neuroses laden that salvation, redemption, and forgiveness sounded COOL to you, well, the owners & operators of Salvation, Redemption and Forgiveness Unlimited would always go on to explain -- you could have it! Easie-peasie! No cost at all!
You just had to 'accept Jesus Christ as your Lord and Savior'. You had to 'let Jesus into your heart'.
And you had to do it sincerely. You had to walk the walk, not just talk the talk. Because Jesus KNEW if you were a bullshitter. If you didn't really MEAN it, then you didn't get nothin'.
What did you have to do, to really 'welcome Jesus into your heart'? Well, there was a lot of specific stuff, but in general, you basically had to let Jesus -- or his local franchise rep, actually -- mind control your ass right, left, up, down, and sideways. You couldn't swear. You had to go to church and read your bible. You had to think clean thoughts. You had to stop whacking off and you better not even think about having sex before you got married and when you were married you better not even think about anything but the ol' in-out. Missionary position; no cowgirl, please.
You had to constantly, at all times, think about whether or not what you were doing was What Jesus Wanted You To Do. And, as this was all first laid on me back in the 70s, you had to hate fags quite intensely, too.
(Also, you had to put some money in the offering plate. That may have been the most important thing in the whole scam... at least, to the local Jesus franchise owners.)
All of this is just ridiculous. The idea that the Creator of the universe gives a flying fuck what bodily fluids come out of one hairless ape's appendages and which parts of another hairless ape's anatomy those bodily fluids might come into contact with, and what happens after that, is just laughable and ludicrous. It's like, I made myself an ant farm for a science project, and it's kind of a cool ant farm, and I like to look at it through the glass side of it sometimes, but, oh shit! Some of the workers are getting it on with other workers! Look, that drone over there is spreading some of its body fluids on a different drone! And those ones over there, they're carrying bread crumbs in a way that's different from most of the other ants! Holy crap, I'm going to bomb the living shit out of this ant farm! I'm getting out the gigantic magnifying glass and it's My Death Ray Will Destroy Antopolis, BWA HA HAAAAAA!
No. No. I am a human being, I have more important shit to take care of than worrying about how ants entertain themselves in their spare time.
Here's the thing, though -- down in that ant farm, for all I know, some of the ants have tumbled to a racket that works well for them. They've realized I'm out here. And now, even though I don't talk to them any more than to any other ant, they've started telling all the other ants that they know what I want. Coincidentally, what i want is (a) for all the other ants to do what these special ants say and (b) for all the other ants to never do anything that annoys the special ants.

And I'll bet they start all their bullshit off with "Good News, fellow ant!" and/or "Fellow ant, there's a special gift just for you!"
Posted by Doc Nebula at September 24, 2018 No comments: