I dare you to make less sense

My initial impression -- namely, that THE VENTURE BROTHERS were little more than THE TICK meets JONNY QUEST, and overall, the show was consistently only about half as funny as THE TICK, turns out to have been premature. As Mike Norton said in the only comment this blog has had in over a year (I think), you can't judge the series by the first seven episodes. It does, indeed, evolve over the first and second seasons into something that is far more complex and valuable than merely the sum of all its inadequate, badly damaged parts.

I kind of wish I'd watched the first two seasons without having the Big Secret About Hank And Dean pre-spoiled for me. As it was, I probably didn't get the full impact of the death scene at the end of Season 1, or the revised credit scroll at the start of Season 2.

Having said all that, and having watched with real pleasure as what at first seemed an extremely formulaic show did indeed develop into something with real depth and breadth, something that was both nuanced and rich, something that actually rose above the limitations of the genre and became a multifaceted and almost beautiful and moving ongoing story of one of the world's most tragically disfunctional extended emotional families, replete with some of the most bizarrely developed and unhealthy psychic symbioses imaginable... for all of that, I find myself, in the end, feeling disappointed.

I know where it came from. I went into the last two episodes of Season Two psyched, thinking "Okay, next paycheck I'm buying Season 3". I emerged on the other end of that particular 2 parter... deflated. It was a big grand superhero wedding story, and all my favorite VENTURE BROTHERS characters were there... and overall, I was just kind of bored and disappointed and depressed by it. Phantom Limb had been kind of cool, but now he was just another jerk. Dean's addled, delusional wanderings through the Monarch's engine room filled me with a burning desire to watch nearly anything else, even ROCK OF LOVE, while they were onscreen. The ongoing saga of the Monarch, Dr. Girlfriend/Fiance, the Monarch's two numerically-named henchmen, the revelation of the true identity of the Sovereign... nothing really seemed to work for me. The only thing that really worked for me was watching Brock lead the Monarch's horde of nearly worthless goons in an attack on Phantom Limb's forces... and Brock always works for me.

Which is yet another reason I'm disappointed... apparently, Brock leaves at the end of the third season, and is replaced as Dr. Venture's bodyguard by Sgt. Hatred. Yay.

So, yes, THE VENTURE BROTHERS did grow up to be something far more than it seemed like it could in those first seven episodes, and I did very much enjoy a lot of what I've seen much more than I expected to. But at this particular moment, I largely feel disappointed in the series, and have little interest in watching any more of it, knowing what I do of its future direction.
Posted by Doc Nebula at January 20, 2010 2 comments:

For the exceptional mind...

...there is no greater validation than the misapprobation of the mediocre.

Here's a bunch of guys who, apparently, spend most of their time arguing about stuff like this:

semicolonsrock posted:
Jut switching in from 3.5 I am frustrated at not being able effortlessly whip up a min maxed character, and kind of annoyed that the fighter seems to have turned into a solely melee class (This kind of forced specialization is awful). Longbow wielding human fighters were pretty much my favorite character.

Why don't people ever get this is meta gaming to the extreme? To the world in-game you are not a "Bow using fighter" you're "a guy who uses a bow". A ranger and fighter using a bow are, in-universe, no different in profession.

This guy is crazy for all kinds of reasons, but when he talks about gaming...

That whole blog is a peach - pure concentrated essence of grognard. He brags about the Kindle sales of his terrible, terrible books and repeatedly mentions how upset he is at the lack of comments on his blog. He also has the Angry Fanboy thing down perfectly (gently caress you, Neil Gaiman! gently caress you, Brian Michael Bendis! gently caress you, George R. R. Martin! gently caress you, John Rogers!) Dude's in his 40s and just starting training for a Call Center position. Not bad for a Master Class spouse/parent!

They keep using this word 'grognard'. I was pretty sure I knew what it was, but just to make sure, I looked it up:

Grognard is French for "grumbler".[1] It is not necessarily pejorative and is sometimes used as a compliment. Historically it meant a soldier in Napoleon's army, particularly a member of the Old Guard.[2]

"Grognard" came to mean a veteran wargamer in the early 1970s.[3] It was first used by John Young, at that time an employee of SPI, and subsequently popularised by Strategy & Tactics magazine.

Now, I suppose it's possible that I'm a soldier in Napoleon's army, particularly, a member of the Old Guard, and I just don't remember it... maybe I've been hypnotized into forgetting all that stuff, for the good of the timeline, or whatever. I can roll with that.

But I've never played a wargame in my life, other than some RISK when I was a kid.

Do I really have to quote Inigo Montoya on semantics, here?

I have the love, respect, and admiration of my wife, my children, and some few friends. And that means a great deal to me.

Someday, the time may come when I begin to see some small or large professional success in the field of writing, when the eyes of the world turn to me and my work, and then, I may well know at least some small shreds of admiration from strangers whom are actually, well, admirable.

Until then, the continuing contempt of the weak, the stupid, the envious, the virginal, and the emotionally disfunctional will have to be enough for me.

I will say, it makes me sad that someone as cool as the original Invisible Kid has apparently come back to life as a D&D geek who mocks other people behind their backs. Bad form, Lyle. Mon-el and Ultra Boy would be ashamed of you.
Posted by Doc Nebula at January 16, 2010 No comments: 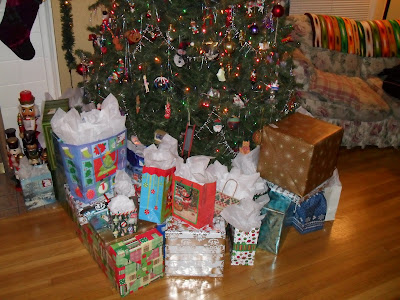 Christmas this year was pretty wonderful. After some past holiday debacles which need not be detailed here, the two oldest kids were trying hard to stay on their best behavior, and having learned some valuable lessons ourselves, SuperWife and I put on a show. All presents were eagerly fallen upon and appreciated, although the biggest hit was the gift Santa left for our entire family - a karaoke machine, along with 15 mixed karoake discs.

It wasn't such a nice gift for our new neighbors, I imagine, but when we originally decided to get the thing, the apartment immediately above ours was still empty. Ah, well.

Super Drama Adult was delighted to find the new Beatles version of ROCK BAND upon unwrapping a gigantic box to the rear of the tree; Super Dependable Teen was equally pleased to open a tiny, tiny giftbag and find within a new I-pod. And Super Adorable Kid was over the moon about her new American Girl doll and attendant paraphenelia, although Nate entirely stole the show with his gift to her of a 17" flat screen TV for the top of her bedroom dresser, which he then also installed for her using his Level 7 Tech Geek skills to hook it up to our existent cable line.

As for me, well, it wasn't about me, but thanks to a last minute, unanticipated Christmas bonus, SuperWife and I okayed each other to spend a relatively small amount of money on each other at the last minute... about five days to the Day, actually. So I ran around like a monkey on crack trying to spend my allotment, and SuperWife, naturally, deployed her assets far more wisely and strategically, with the end result that she wound up with a lot of crap she has no use for, while I got huge stacks of incredibly cool loot, including many, many books (deep breath: WHISKEY AND WATER and BLOOD AND IRON by Elizabeth Bear, THE GIVEN DAY by Dennis Lehane, THE SPIRAL LABYRINTH by Matthew Hughes, INSIDE STRAIGHT by George R.R. Martin, and THE PREFECT by Alastair Reynolds), a couple of hardcover comics collections (the second DC Archives Supergirl volume, and the latest Fantastic Four Treasury), a Tampa Bay Buccaneers Santa hat, an extra special Snuggie with pocketses, a fabulous t-shirt, a card shuffler, some comic book image imprinted undies, a lovely warm corduroy winter jacket, the Director's Cut of WATCHMEN on DVD, and, in my stocking, a booster of HAMMER OF THOR, just for nostalgia's sake, and what appeared to be a pack of DISSENSION Magic cards, but upon opening, proved to be a customized booster created by my wife full of amazingly cool and rare vampire cards, which have already energized my vampire deck to the point where everyone else at the table groans when they see me breaking it out of the box.

Then from other people:

Nate gave me an entire booster box of DISSENSION packs, which was awesome, Super Dependable Teen gave me QUANTUM OF SOLACE on DVD, Super Adorable Kid gave me one of the books listed above (the George R.R. Martin one), Super Drama Adult and her girlfriend gave me a much appreciated copy of THE MARVEL VAULT, which I had pined and moped over ever since we bought the last one off a Books-A-Million remaindered table and sent it to Mike Norton last year, and which, now that I own it, has proven to be a fabulous treasure trove of wonderful and beloved goodies indeed (although the interior text by Roy Thomas and Peter Sanderson is generic, boring, imprecise, all but useless as either a historical or journalistic document, and in short, not much more than a fairly tedious advertiser's puff piece), my mom and stepdad got me a movie trivia game, my in laws gave me a sweatsuit and some microfleece pajama pants and a Christmas ornament and some socks.

I hope all of you had a wonderful Christmas, too.

And for Mike Norton: Pluto, Fandral, an Asgardian Warrior, Malekith, and Mico Minoru. I'm a little shocked at how crappy most of the sculpts I got look; Pluto is especially disappointing, although Mico Minoru looks like her mutant ability is stretching her neck like a giraffe, or something. The Asgardian Warrior looks by far the best of the lot, although Fandral isn't all that shabby, either. I didn't get any kind of Feat or other sort of card, besides the power cards for the sculpts, so I don't know if I got a bad booster or if the new company isn't including cardboard components any more.
Posted by Doc Nebula at January 03, 2010 4 comments: