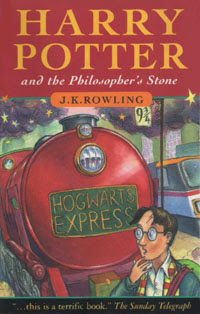 I'm hewing my way through the first Harry Potter book. It's not by any means anything I'd call a pleasure, although I had vague hopes it would prove otherwise.

I'm reading the goddam thing dutifully, out of a sense of long overdue moral obligation. As a man who has despised everything about Harry Potter since the first book was published, entirely by osmosis, I finally decided I might as well actually read one of the fucking things, to see if my entirely negative opinion of all things Potter is in any way justified by the source material itself.

Now, as I said, I was at least faintly hoping to be pleasantly surprised. And unfortunately, I haven't been... at least, not yet. I will say this, though... Reading the book out of a sense of ethical obligation is strangely appropriate to the text itself, because it seems to me that it was written in much the same manner. Which is to say, at least in this first book in the series, J.K. Rowling writes as if she's cleaining a toilet. It's a nasty and unpleasant job, and she'd rather be doing any number of other things, but by God, that toilet needs to be cleaned, so she's going to do it.

Rowling shows no flair or talent for words in this novel at all. Nor does she seem to have a particularly fine or sophisticated grasp of story structure, plot, characterization, or exposition. Her dialogue frankly sucks, her writing style, such as it is, contains nowhere within it so much as a subatomic particle of grace or wit, and she badly, badly needs someone with authority, somewhere, to bar her from ever, ever, EVER inventing another world-specific proper noun again.

None of her world specific name coinages work well. Every once in a while she comes up with something that sounds more or less adequate to the job she sets it -- Slytherin, for example, isn't a terrible name for group of kids who are all destined to one day be evil sorcerers, although, in all honesty, if every sorcerer who eventually goes bad is always a Slytherin, why not start, like, teaching all the Slytherin kids crappy magic? But even here there's nothing even remotely subtle; you hear the phrase 'Slytherin' and if it doesn't strike you that there's something vaguely sinister there, then you were most likely shocked to be told that that guy Grimas Wormtongue was a bad 'un, too.

Voldemort isn't a terrible name for a villain, either. It ain't great. But it works okay.

Yet, for every made up phrase or proper noun she comes up with that kinda-sorta works okay, albeit in a halting, stumbling, haphazard fashion, there are eighteen more that are just retarded. Gringrott's? Who the fuck is going to bank at a place that sounds like a toe fungus? Hufflepuff? C'mon, she stole this from the Three Little Pigs. How is this supposed to be cool? Hogwarts? Seriously, you want me to go to school at a place called Hogwarts? It sounds like something that's resistant to penicillin. Knuts? Knuts? Do I even have to describe how fucking brain damaged I'd have to be before I ever let myself refer to a bunch of coins in my pocket, even to myself, as Knuts? Fuck all that.

Probably the worst name Rowland ever came up with, though, is one that's all through this franchise -- not quite as common as Hogwarts (a phrase which, honest to jebus, makes me wince every time I hear or read it), but one that's pretty well traveled nonetheless -- Dumbledore. I mean, what? The wisest of the wise, everybody's magical mentor, the Gandalf, the Obi Wan Kenobi, the Professor X of the entire Harry Potter universe... and he sounds like he flaps his gigantic ears to fly. Seriously, what the fuck was Rowland thinking?

Now, I knew she came up with crappy, stupid sounding names and phrases before I ever picked up the book; I got all that just from living in a world packed to the rafters with insane, drooling Harry Potter fans. I guess I was just hoping that, once I saw these dumbass phrases in their original context, they'd seem better, somehow.

Well, so much for that.

Here's the thing, though. I know it's extremely picky of me, but, well, even within a fantasy context, I still like my fictional worlds to make some kind of sense. Now, I understand what Rowland is trying to do here... she wants to create a world that is very similar to ours, but in which various fantasy elements (like magic, and magic users, and magical creatures) also exist. Rather than integrate these fantasy elements into our more mundane reality, which would create an entirely different sort of culture and society and world for everyone to live in, she wants to keep this all separate... so she can have the real world we all live in and are familiar with, but, at the same time, have all these fabulous fantasy elements that only a select few actually know about and interact with.

It's a great gimmick. Probably the most appealing thing about the books is this distinction between Muggles and Magical Folk, especially since it's pretty much designed to make any loyal Harry Potter fan feel superior to anyone not initiated into the inner mysteries... a Muggle, as it were.

As an aside, one reason I've always largely loathed Harry Potter is an unpleasant experience I had back in 1999 -- I think -- with a fellow temporary employee I was forced to interact with during a brief clerical assignment at an insurance office in Tampa. This fellow saw me reading something geekish -- I couldn't tell you what it was now -- on a break and decided to befriend me. However, upon learning that I'd never read a Harry Potter book, and had no desire to borrow any of his so I could remedy this grievous character flaw, he began to berate me by saying "Well, you're just a Muggle. Huh haw, huh haw! You don't know what that means, but that's because you're a Muggle! Huh haw, huh haw! You're a Muggle!"

Actually, I did know what the phrase 'Muggle' meant, because I'd read about the Harry Potter phenemenon by that time, and the word had been prominently mentioned in the articles I'd read. But I didn't bother to argue with him, I merely tried to ignore him as best I could for the remainder of the time I had to work with him... which wasn't easy, because he liked his own 'joke' so much that he compulsively repeated it, along with braying spasms of near hysterical laughter, every time he saw me after that. I think it was probably one of the deepest disappointments of this fellow's life to that time, that he couldn't get anyone else working the assignment to start calling me "Muggle", too.

Now, I'm very familiar with the phenomena of spurious elitism. It's a malady many of my geekish brethren fall victim to, and it's understandable. Many geeks are outcasts and rejects, living on the fringes of normal society because they are conventionally unattractive, or sometimes simply so gauche and otherwise socially clueless as to be intolerable to anyone who isn't also an outcast. For such people, the chance to be an expert in anything has a powerful draw, and the more obscure their area of expertise is, the more superior to non-experts they feel. I've had similar experiences to the one I described above with fellow geeks whose 'expertise' lay in other fringe areas... Dungeons and Dragons, Magic: the Gathering, superhero comics in general, the occult... any time someone has learned a lot of trivia about something that most people just don't give a shit about, there's a danger they will become insufferably arrogant about it... as if the fact that they can (mis)quote reams of Monty Python or Dr. Who dialogue for hours on end somehow makes them superior to people who have actually had real sexual intercourse with partners who were living, conscious, willing, and human, all at the same time.

Chronic to geekdom though this condition may be, I will say this -- I have never seen a subgrouping of geeks more prone to spurious elitism than Harry Potter fans. They all seem to have embraced the concept of being a "non-Muggle" with the avidity of a Templar snatching up the One True Holy Grail, and while it is certainly correct that few Harry Potter fans I have known have been remotely as rude about the whole Muggle thing as the guy I mention above, nonetheless, it seems to me that nearly all devoted fans of Harry cherish, in their heart of hearts, the notion that they themselves are certainly intrinsically and undeniably superior to mere Muggles.

Which brings us back to my affection for fantasy worlds that make actual internal sense: Here's something about Harry Potter's reality I do not understand -- why is the 'wizarding world' (yet another truly horrible phrase coinage) kept secret from the Muggles?

When Harry asks this question of Hagrid in the volume I'm reading, he is told that if Muggles knew about magic, they would expect magical solutions to all their problems. The implication is, providing magical solutions to Muggle problems is bad, and therefore, the very existence of magic and magic users must be kept secret from these tiresomely needy Muggles. Otherwise, one supposes, wizards and witches would be kept busy feeding the hungry, curing cancer, disarming nuclear weapons, coming up with cheap power sources, fixing global warming, ending wars, and all that crazy bullshit, and wouldn't have any time to sit around in magical pubs drinking magical ale and sending each other magical mash notes via magical owls.

Obviously, this explanation troubles me. This is very much like saying that people who don't know how to blow glass aren't allowed to have incandescent bulbs in their homes, and if you can't construct a central processing unit from copper wire and cadmium chips, you have no right to access the Internet. Magic, like applied engineering and basic scientific knowledge, is a field of human knowledge whose primary purpose is problem solving (or it would be if it actually existed). You shouldn't need to be able to cast a spell to benefit from the existence of working, functional sorcery, any more than you should need to be able to wire your house before you enjoy the benefits of electricity.

Now, I'm only 3/4s of a the way through the first book, and I don't even know if I'm going to finish this one, much less essay another, so it's very possible that at some point someone smarter than Hagrid may provide Harry with a much more intelligent reason why 'the wizarding world' keeps its existence entirely secret from all the Muggles.

Still, I doubt it. I think the reason is exactly as presented -- wizards are a bunch of stuck up, preening pricks who don't want to be bothered using their magical powers to help improve the existence of a bunch of worthless stupid good for nothing Muggles. Not that fans of the franchise will object to that, since it seems to be pretty much how they feel about Muggles, too.

Now, having said all this, I don't think there's much of anything wrong with the Harry Potter franchise that couldn't be cured by someone with actual writing talent. Neil Gaiman would probably write a terrific Harry Potter novel. I just don't think J.K. Rowling has managed it yet... or, at least, she didn't with the first one, which is likely all I'm going to read.
Posted by Doc Nebula at September 06, 2007