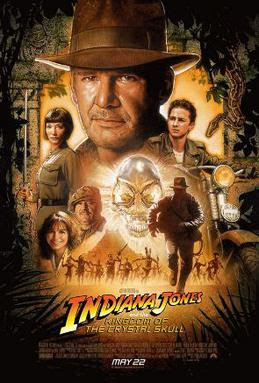 (If spoilers be buggin' ye, proceed at your own risk, fedora fans.)

Remember RAIDERS? That great scene (ah, but they're all great scenes) where Indy and Marian are trying to steal that cool looking Nazi flying wing so they can abscond from the desert with the Ark, and everything that can possibly go wrong does, and Indy ends up having to fight this gigantic bald Nazi airplane mechanic, and after getting the worst of several punch and kick exchanges, he eventually triumphs when his foe is too stupid to avoid the plane's propeller?

Now flash forward 27 years to 2008 (excuse me, I'll be out in the kitchen with my head in the oven, jesus CHRIST, TWENTY SEVEN YEARS, somebody please give me my life back) or 21 years to 1957, the actual setting of the newest Indy movie, Indiana Jones and the Kingdom of the Crystal Skull. Indy is forced to do bare-knuckles battle with another oversized antagonist, this time in the middle of a swarm of flesh-eating army ants devouring everything in existence all around them. The two exchange blows savagely, pummeling each other back and forth across the small clear area they occupy within the sea of evil omnivorous insects.

Now, unlike the giant bald Nazi from the similar scene I've already cited from the first film, this particular opponent of Indy's has been in the movie from the very start. He's had probably an order of magnitude more screen time than that first guy Indy fought. He most likely has even been given a name at some point, although I couldn't tell you what it is. And yet, for the entirety of the fight, I found it difficult to muster up much if any interest in it. I didn't know anything about this guy. He wasn't cool or menacing or in any way engaging or emotionally interesting to me. I honestly just didn't give a fuck.

Thinking back on it now, I'm not even sure why he and Indy were having an unarmed brawl at that point in the movie... there seems little purpose in stopping to mash someone's face flat with your fist, when you're actually sprinting for a river just ahead of an unrelenting army of flesh eating ants intent on stripping the flesh off your very bones.

Here lies the essential difference between previous Indy films and CRYSTAL SKULL, the essential reason why RAIDERS and LAST CRUSADE excel, and CRYSTAL SKULL is a lame, pointless crapapalooza... because in the latest installment of the Indiana Jones franchise there is no characterization at all. None. Not a jot, not a tittle, not the merest subatomic iota of characterization, no matter how high or low you search or hard you hunt, not one single character ever displays anything even remotely beyond the merest rote rituals of stock personality for the entire film.

In RAIDERS, in LAST CRUSADE, even in the much (and justly) reviled TEMPLE OF DOOM, the various villains and supporting characters have actual personalities, at least, to a limited extent. They seem like real people, or, at least, real three dimensional adventure fiction icons, even if, as in TEMPLE, those personalities make us hate them and want them to be immediately smashed to a pulp between the gears of some gigantic ancient occult temple mechanism.

There is more life, more personality, more real depth and breadth, in nearly any of Indy's fictional opponents from RAIDERS, even the minor ones -- the eye-patched, monkey directing Arab on a motorcycle, the cool Nazi with a bald spot Indy battles on the Ark truck, the Nazis in street clothes who walk into a shadowy room in Cairo and nod to the various knife wielding Arabic street thugs, the nasty little monkey spy itself -- than there is in any or all of the various Commie KGB thugs who chase Indy & Crew from one end of this film to the other. Even the central villainess has barely enough substance to qualify as a cardboard cut out.

See, in 1980, Lucas and Spielberg still understood a basic truth about fiction, especially pop culture fiction, most especially open ended serial pop culture fiction like the STAR WARS or INDIANA JONES franchises -- it succeeds or fails on the basis of its characters. The first STAR WARS movie had spectacular special effects for its time period and so, for that matter, did RAIDERS OF THE LOST ARK -- but those movies would have sunk without a trace had they not had living, breathing, interesting, fascinating characters. In STAR WARS, the fact that its central crew of stock SF/fantasy archetypes attained something like real life is a happy accident attributable more to unanticipated chemistry between the cast of little known actors than Lucas' story or direction. In RAIDERS, Spielberg's direction probably contributed somewhat to the palpable sense of real life personality audiences could easily perceive in its characters, and, certainly, a very talented cast of actors helped enormously, too.

CRYSTAL SKULL has no essential characterization at all; other than its temporal setting and copyrighted central characters, it could just as easily be a TOMB RAIDER movie. All Lucas cares about is the special effects, and yes, everything in this movie that's done with CGI looks spectacular, but that's nowhere near enough. There isn't a single character in the film that engages the audience's emotions. You don't much like the heroes, you don't much hate the villains. Minor supporting characters you've never seen before come and go leaving little emotional impression behind them, something one certainly can't attribute to the minor supporting characters in RAIDERS, like the two government agents who recruit Indy from his college classroom towards the start, or the ancient Arabic scholar who translates the writing on the headpiece of the Staff of Ra. When the various villains meet horrible dooms at the end of CRYSTAL SKULL, you can't really care, because they've never really been brought to life in the first place. Even the big Arabic swordsman with the gigantic scimitar who cackles in a sinister fashion right before Indy shoots him dead in RAIDERS has more personality than any of these mooks.

Just as Lucas' primary concern seems to be the special effects, Spielberg seems to be mainly motivated by cramming as many 1950s pop culture cliches into this film as possible. So we have the KGB menace, and FBI agents suspecting Indy of Red sympathies, and a sidekick dressed up as a greaser, and a malt shop battle between greasers and letter jacket wearing college jock types, and an A-bomb test blast, and little grey men from mars, and a genuine flying saucer that doesn't actually fly anywhere, and I didn't care about any of it, because at no point were any of the characters in the movie more than one dimensional to me.

Characters are our entry point into spectator entertainment. If we care about a character, if our emotions are engaged, then we will be drawn into the film or TV show and find ourselves responding to it on a visceral level. As all forms of entertainment are designed to simply artificially create and then release tension in a satisfactory manner, and as most forms of entertainment aren't interactive, this kind of visceral involvement with the artform is absolutely necessary if the audience is going to enjoy the experience. Otherwise, all we're doing is watching at a distance.

That's what happens with CRYSTAL SKULL. As with either of the TOMB RAIDER movies, the spectacular special effects ladled heavily on top of no characterization whatsoever simply left me feeling that I was watching a very long, not particularly interesting video game that I wasn't given a controller for.

Other people evidently hate this movie for the undeniable plot stupidities in it, and I admit, such stupidities are legion. Yet I don't mind Indy surviving an A bomb blast by jumping into a refrigerator, even when that refrigerator gets blown out of the bomb site at what must be several hundred miles per hour, smashes hard into the desert what must be several miles away and rolls and skids another hundred yards before Indy hauls himself back out again, battered but unbowed. Indy should and certainly would be a baked smear of sediments inside the icebox after riding out a point blank nuclear blast, but what the hell, it's pulp adventure. Similarly, when Indy's sidekick Mutt swings on vines like Tarzan and somehow manages to overtake two all terrain vehicles hurtling at what must be at least 45 miles per hour along a cliffside several miles away from his starting point, arriving just in time to vanquish the villainess, it doesn't bother me. Yeah, this stuff is physically impossible, but, again, what the hell, this is pulp adventure.

The plot of CRYSTAL SKULL is rife with belief straining stuff like this. However, let's remember that the events depicted in RAIDERS are even more ridiculous -- Indy gets shot, thrown through a windshield, dragged under a speeding truck with a bullet in his shoulder, climbs back up from the bottom of said speeding truck, crawls along the top of it, swings back down into its cab, punches out its driver, throws said driver out onto the hood with one good arm, and then manages to knock another truck full of Nazis off the road into a suddenly appearing mountain abyss while driving on a caravan route through a desert that is 'three weeks in every direction', which abyss then vanishes just as quickly as it appeared, and I'm not even going to talk about how Indy gets hauled through hundreds of miles of the Atlantic Ocean while lashed to a periscope after which he takes on an entire island full of Nazis, punching people out and stealing uniforms and running around with rocket launchers and what have you displaying little or no ill effects from being shot, beat on, blown up, exposed to the elements, and sleep deprived for the past several days at the very least.

If you can slug down all that without a chaser, you really shouldn't have too much trouble with any of the plot excesses in CRYSTAL SKULL. However, the reason audiences can accept all that nonsense without a quiver in RAIDERS is not that movie audiences are uniformly stupid (although I admit, it often seems that way) it's just that RAIDERS is full of interesting three dimensional characters who interact with each other in ways we find fascinating and believable. CRYSTAL SKULL has, comparatively, very few moments throughout its running time where we are really forced to suppress any knowledge we may have of how things actually function in the real world, but, on the other hand, it also has no characterization to it whatsoever, so when we are confronted with a "no fucking WAY" moment, we are much less likely to forgive it and move on.

All told, INDIANA JONES AND THE CRYSTAL SKULL is not a movie I feel any compulsion to own a copy of. Should the Indiana Jones franchise continue in the future, I sincerely hope Lucas and Spielberg turn it over to somebody who can actually make the audience care about what is happening on screen.
Posted by Doc Nebula at May 26, 2008